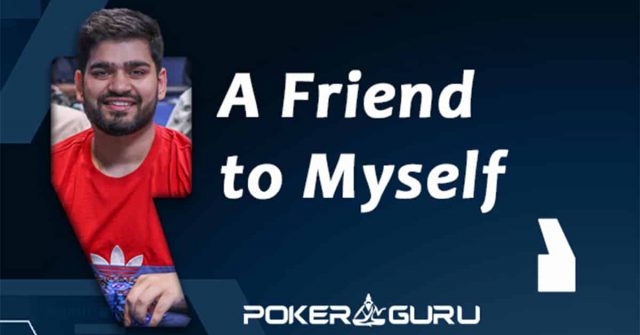 A friend to myself – Gaurav Sood

Poker is a game which opens you up to different levels of your own personality and brings forth some emotions you would have otherwise been unaware or ignorant about. We play a strategy game based on incomplete information for a living which can be emotionally draining at times especially for individuals who have high aspirations of themselves. Poker isn’t even close to being solved and hence committing mistakes is inevitable in game but also the only source that gives you the openings to incrementally refine your skill set. The impact tends to be comparatively more extensive in tournament poker, where an error in a single hand can be worth multiples of your current bankroll (net worth) and it’s a given that you will commit those errors multiple times. I have made innumerable blunders in critical spots and still continue to make them time and again but over time, I’ve understood the key is to create a healthy association with committing mistakes and consider them as opportunities to grow. The hands that I mess up at crucial stages of a tournament are also the areas of the game I put ample work in thereafter and hence the major blunders lead to the most profound developments in me as a player. The goal should be to misstep lesser today than you did yesterday — rinse and repeat.

To be able to reach the top in poker or any other endeavor, having structured systems for putting the hours in and scheduling it efficiently is absolutely essential. I consider two major systems that comprises of all areas we focus on: macro and micro processes; I strive to be stern with myself over the non-negotiable routines (macro processes) I have but I have also been guilty of being too hard on myself at times; indulging in self depreciating behavior after making a mistake or a chain of few mistakes (micro processes). As I have progressed in my poker career, identifying some patterns in this journey till now, I have gained more clarity and begun deliberately shifting my focus towards macro processes from the micro ones. I have constantly tried to be readily forgiving to my own self after committing errors and make certain to not slack with the work that needs to be done to move an inch closer to where I would want to be. It’s a sweet spot between being too harsh on yourself and being complacent and lazy. It’s a long journey ahead and the goal is to use as much of my time, energy and focus on ensuring the macro processes are in place rather than worrying or cribbing about the micro processes — an infallible way to make the journey worthwhile too.

It’s been a little short of four years I’ve turned professional playing poker and playing the game for a living has been an extremely humbling experience for me. A major factor being the innate nature of the game; even if you’re the best in the world, you still have to be extremely good at losing as it will still happen ridiculously often. There will be plentiful sessions when winning plays will lose you stacks because of some uncontrollable factors. Some of my worst sessions comprised of committing a mistake early on in the session and then often what happened was the first mistake created a spiral of repeated mistakes that followed. I have seen myself playing my A-game when I have embraced the chaos in my head and let it take it’s course while doing what I know to the best of my knowledge. There will be countless spots where you would think you did the right thing just to realize after going through the hand in depth that you weren’t even remotely correct about your assumptions in game. I find these hands everyday, and that’s what reminds me of a hilarious tweet from the legend Erik Seidel which says: “It’s funny being considered an expert about a game which confuses me every single day.”

Incompetence will result in indecision and inaccuracies, which would give rise to curiosity and that’s how our mistakes would become the building bricks to our wall.

The game tickles with multitude of emotions inside us which can be overwhelming for anyone. While tackling with those ebbs and flows of the game, I often realize how beautifully it teaches you invaluable life lessons. This is one of the most significant lessons poker has taught me in life; having a harmonious relationship with committing mistakes and viewing them in good light as they catalyze our growth in the game and in life, likewise. It’s crucial to realize that in this game; the learning never stops and you will always be a work in progress. The objective is to be cognizant of your flaws, work on them diligently to become a better equipped player, and start being kinder to yourself when you commit errors. As I look back at the last four years, molding myself in the game, I truly resonate with this quote by Seneca: “What progress, you ask, I have made? I’ve begun to be a friend to myself.”